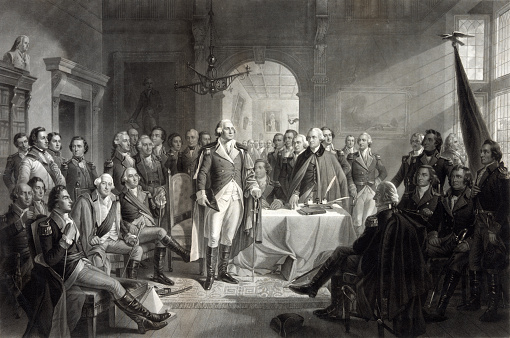 Despite the many individuals and media organizations that say the citizens of the United States have never been more divided, a good look at history shows we have always been this way. It’s just taken different forms during different decades. Before dismissing this idea as too crazy to entertain in view of what’s going on around us now, let’s look at the reason I made that statement. I realize a lot of families can’t even have a dinner conversation without an argument over politics, but (alas) a certain amount of rancid political division has been present here since the first settlers landed.

I won’t start that far back though. I’ll begin this tale of division with George Washington’s Farewell Address in 1796. You remember him, right? The one often referred to as the Father of our Country? Well, in his farewell Presidential address, Washington advised American citizens to view themselves as a cohesive unit and to avoid political parties. He warned against political parties or “factions” because he believed the parties would split the nation apart. His exact words were:

“Let me now take a more comprehensive view, and warn you in the most solemn manner against the baneful effects of the spirit of party generally.”

Humm… was he clairvoyant, or is this something that’s too obvious to ignore? At the time Washington gave that address there were two parties. Now, although we have two major parties that are stonewalling each other just as Washington believed they eventually would, there are actually more than 100 political parties in the United States. Only a few of them, however─ including the Libertarian Party, the Green Party, the Constitution Party and more─ have ballot access because of their numbers. You can see all the political parties and follow links to each if you want by clicking here: https://en.wikipedia.org/wiki/List_of_political_parties_in_the_United_States

But let’s get back to 1796 and take a good look at the fellas in the photo accompanying this blog in their semi-British attire, white-powdered-wigs and all. The system that existed then consisted of the Federalist Party, which supported the ratification of the Constitution, and the Democratic-Republican Party or the Anti-Administration party, which opposed the powerful central government that the Constitution established when it took effect in 1789.

The Federalists, led by Secretary of the Treasury Alexander Hamilton, wanted a strong central government, while the Anti-Federalists, led by Secretary of State Thomas Jefferson, advocated for states’ rights instead of centralized power. Wait a minute, I thought states’ rights became an issue during the Civil War? And in my lifetime, I heard those words come from the mouth of George Wallace during his governorship of Alabama and his Presidential run in 1968.

The split between the Federalists and the Anti-Federalists caused Jefferson, along with James Madison, to form the Democratic-Republican Party in the early 1790s. It championed republicanism (dare you to look up what that really means) political equality, and expansionism. This party became increasingly dominant after the 1800 elections as the opposing Federalist Party collapsed

Another split: The Democratic-Republicans splintered during the 1824 Presidential election and eventually evolved into the modern Democrat Party while the minority faction ultimately formed the core of what became the Whig Party. The Whigs, however, didn’t last long; only until 1854. That party collapsed following bloodshed in Kansas between proslavery and antislavery activists. Wow! Until now I thought all the pro and anti-slavery brawls were between the North and South!

So now we have the Democrat and Republican parties stonewalling each other so nothing gets done. Perhaps it is time for some of those third parties to band together into one party big enough to break through the tie.

I wonder if George Washington is looking down from another realm shaking his head and muttering ‘I told you so.’