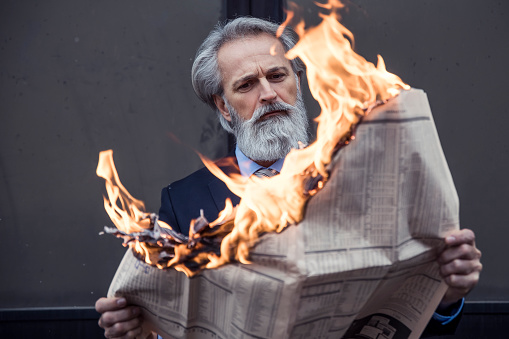 I used this same information in my June newsletter, but since different people read that than look at this blog, I’m repeating it here so I can tell you about my half-price sale on Dirty News one more time.

Dirty News (subtitle) Whose $$$ Pays for the News You Trust, is still $4 in eBook format, only at the Smashwords store, through June 10. It’s available at more than twenty other online retailers which can all be seen at https://books2read.com/links/ubl/3RL8Pp but the current fifty-percent off sale is only at https://www.smashwords.com/books/view/1134868

After June 10, the regular price will be $7.99 everywhere online but since I want everybody who’s curious about how different print publications and television stations can present only one side of a story, or why almost no news reports seem to be given as straight facts without commentary (or worse yet, propaganda) anymore, I plan to run sales often in both eBook and print.
The news is nothing like when Walter Cronkite gave the evening reading of facts during the 1960s and ‘70s. In 1972, he was voted the “Most Trusted Man in America.” That certainly wouldn’t happen to a newsperson today. This book explains how we lost facts to commentary and how politicians are now working the new system to their advantage.
“News” has changed completely in the last forty years due to the gradual erosion, followed by the final demise, of The Fairness Doctrine that Congress instructed the Federal Communications Commission to write and enforce when it first created the FCC in 1934. Back then, there was no way Congress could foresee that the twenty-three US radio stations would expand so drastically, or that almost all American homes would soon rely on television news; let alone foresee the Internet.

Major news stations are now owned by six mega-corporations, and I’ve listed who they are. Two large financial groups are also buying up news outlets at this very time, which I will be covering on my blog. Worse yet, most of these stations are backed by the same corporations and billionaire CEOs and board members who back politicians and although they have billions in assets, they pay no taxes because of the way our tax system is set up. It’s all legal. The low-and-middle income people pay, but the most-wealthy pay high-priced lawyers to legally protect their money from the government tax system. Having gotten this information from an IRS agent as well as through my own investigation, I listed some of the wealthiest people whose names most readers will recognize, who don’t pay, some of whom actually get mega-refunds.

Besides those persons, I’ve named CEOs and other large stakeholders in today’s media conglomerates, and tell you how you can check who owns the television stations or print publications you count on to give you your news in a step-by-step, link-by-link way.

I figured most citizens would want to know whose feeding them their news and how to check to see if any of it is accurate. For that reason, as well as the fact I was personally outraged at the tax laws enacted to benefit the wealthiest behind regular working citizen’s backs, I will be continuing to follow our news on my blog, Americans for Truth in News, which you can find on my www.pennyfletcher.com website. I encourage your comments, and especially good news sources you have found that report facts without telling you what you should think. Dirty News lists several sources I check regularly that seem to be doing a good job of that, as well as government sites where you can find actual statistics and reports on many subjects of interest, like inflation, housing, healthcare – and taxes!